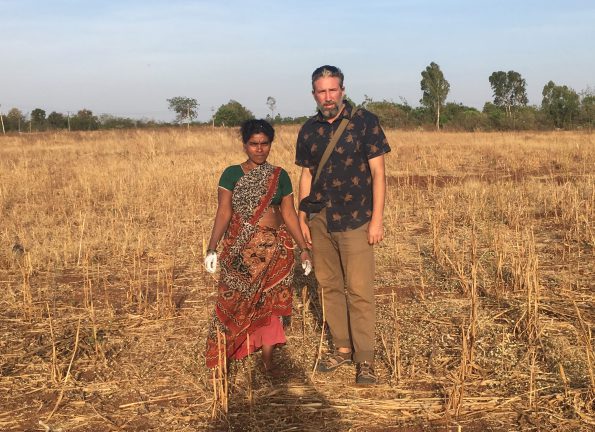 Simon, an intern from Australia,  is working with Bagitamma, a widow from a farmer suicide. They are from the Untouchable caste which is the lowest caste (social division of groups of people)  in India.

Her husband owned 2 acres of rocky, desolate land. They decided to get a loan for 100,000 rupees from a private lender in order to drill a bore well to grow an irrigated cash crop. This is a lae amount of money for people who earn only 150-300 rupees a day.  When the well was drilled, it did not strike water, and he had no hope of repaying his loan.  Unfortunately Bagitamma’s husband did not understand the options he would have had from a government loan in this situation.  With a government loan their interest would have been lower, and when water was not found, they would have only required them to pay back 30% of the loan. The government also does not confiscate land if debts are not able to be repayed.This reality depressed her husband so greatly that he committed suicide. Bagitamma was left alone with her 3 daughters ages 5 months, 2 years, 4 years, and a debt of 100,000 rupees.  Distraught from the grief of their only son’s death by suicide, Bagitamma’s in-laws became ill. In India, there is a strong culture of sons.  When you marry, you go to live with your husband at his parents home.  Sons are responsible to take care of their parents in their old age.  So losing your only son in a poor rural village means great difficulty for you in your elder years.  Bagitamma’s father-in-law became an invalid, so when the mother in law recovered, she started to take care of her husband and young granddaughters, while Bagitamma goes out to earn a wage as a laborer.  There is also a culture in India around being widowed.  Bagitamma, who is fairly young, will never be allowed to remarry. Bagitamma is so happy for the internship’s help with her on her farm.  She believes in the importance of rain water harvesting and understands the importance of diversity and organic matter in the soil.  I am really excited to watch her farm flourish in the coming years.  She is a cheerful, practical hardworker.  Her farm is also on the roadside at the entrance to the village so the permaculture done there has an excellent advantage in being a model for other villagers to learn from. Excavating trenches for rainwater harvesting and the living fence

Simon has surveyed the farm and six rain water harvesting trenches were planned on contour.  These were implemented with an excavator.  A nursery has been started for a living fence to surround the farm and protect the planned fruit trees and crops from the village goats, cattle and wild boars. When we return during the monsoon rains, we will plant the live fence, fruit trees and an intercropping pattern of grains, legumes and seed oils. Simon Presenting his final design plan to Aranya Board