Warning: Declaration of jzsc_yourls::set_service($service) should be compatible with jzsc_shared::set_service($service, $api_config) in /home/customer/www/livingecology.org/public_html/wp-content/plugins/url-shortener/components/jz_shortener/jzsc.yourls.php on line 104
 Monsoon Season Planting Story of School - Living Ecology In the beginning of June, we returned with the monsoon rains to do the planting part of our permaculture designs in Bidakanne.  Brad was unable to return so I, Raya, led the implementation of the school design.

The beginning of monsoon is a busy time for the people of Bidakanne.  As the rain is unreliable and unpredictable, people are all busy sowing seeds of their most important crops with the first of the rain.  So farming labor is an issue for everyone at that time, as generally the earlier your crops are sown after the first rain the better they will do. At the school, part of the task was getting the labor to dig the holes for trees through the difficult rocky ground.  40 fruit trees were a part of the plan as well as 80 biomass generating, nitrogen-fixing support tree species.  A row of pongamia pinnata were planted outside the fencing, which we put up during the first section of the internship.  Pongamia are not eaten by goats or other animals, they were planted around the perimeter of the junior school building to protect the children’s classrooms from the intense heat of the beating sun.  We needed to dig 150 holes.

Addtionally, we needed to build the cement water tank with which to water the trees, build the brick walls for the vegetable beds, and get the ropes up for the climbing vines, which were planted to shade the junior school courtyard and install a proper gate for the school.   We also needed to get all the materials on-site, including soil for the vegetable beds and tree pits, as well as the bricks for the water tank and veggie beds.

To achieve these goals we had meetings with the headmaster and teachers, the parents committee and the village mayor (sarpanch).  It was important to us to have engagement from the villagers in the project, what could they contribute.  Originally, they said they would get their broken gate fixed with their own funds but it ended up being costly and they didn’t raise any money for it.  The village mayor got the water line fixed to the school so the tanks could be filled and provided the funds for the faucets for the tanks.  The parent’s committee said they would get the soil from a nearby farm for the planting but none of them came on the day of the planting and neither did the soil arrive, so we dug up the place where there was rich soil from years of kitchen waste from the school kitchen and that was actually better then what we would have gotten nearby! 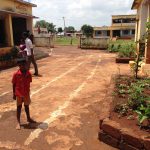 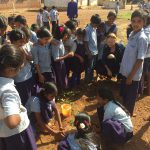 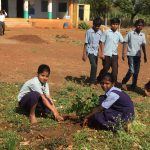 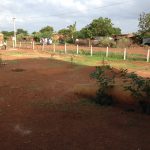 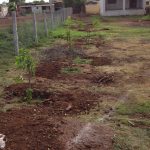 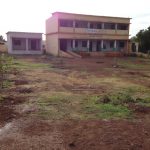 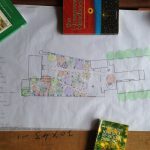 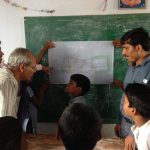 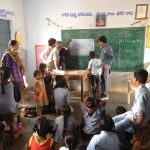 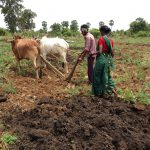 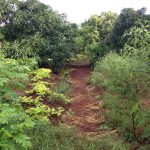 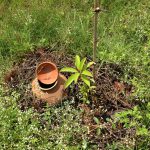 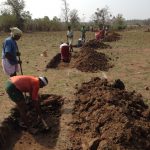 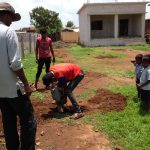 The past village mayor supplied the bricks for free, although at the last minute he tried to charge for them.  When he did that, I said I would go back to my original plan of having the children go around the village picking up all the broken bricks and loading them into our truck.  I thought that would probably be quite a bit of fun, and engage the villagers, besides the bricks coming free that way.  When I said that though, he went back to offering them for free.  Some men from a government work program came to dig the holes but they found it quite hard and gave up.  When they showed up I had expected 2 men to come 6 hours later, so when 15 men arrived to dig I was still in process of marking the spots.  Knowing it may be my only chance for days or weeks to get labor I hurriedly marked the spots as they dug. The next challenge in the hole digging was to get the machine driller to come, which eventually he did.  He was a generous guy and dug the holes larger then what we paid for as an offering to the school trees.  There is only one brick mason in town, so another challenge to get him to do all the work in the time period I had to be there.  But it was eventually done at the last minute.  Lessons learned.  Next project in India I’ll give a week earlier deadline then I actually have!

Before the day of the planting, we brought the design map to the school and taught the senior classes of children to read the map.  It was great fun for them and us to do this.  I could tell they didn’t have fun, interactive lessons often.  We asked children one by one to come up and count how many of each type of tree would be planted and they enjoyed it a lot.  I could also tell it stretched their minds to do something different and that was very satisfying.  And in the process the children really understood what was about to happen to their school yard.

The diversity of fruit trees being planted will provide fruit at different times throughout the year.  The children were also very excited that we had planned the mendhi plant which is where henna comes from, which they use to make designs on their hands and feet. The day of the planting arrived! We brought trees we had purchased from the nursery, as well as ones we had started at Aranya Farm, and trees from the government nursery.  The excitement of the children was fantastic!

As we placed the trees in their spots, it got a bit chaotic with every child wanting to place one, and other children picking them out of their spots and moving them to a different hole.  I was so glad I had gotten to a decent place with my Telegu (the local language) so that I could organize through this.  Ritu, Fazal, and Chendhu were volunteers who helped organize the children and the planting.  I had expected the teachers, who had been so happy about the project and told of their agricultural background to lead groups for the planting, but after the first few trees and some photos they stayed inside the office chatting.  I found that so disappointing but was cheered on by the enthusiasm of the children and all their work planting, carrying soil, gathering mulch for the trees and carefully placing stones around each of the trees so that they wouldn’t accidently be stepped on.

The children had so much pride about the trees that they planted, each one asking me to come and see what a good job they did of planting “their” tree.  It was so easy to feel how amazing the school yard will be in the future; a shady canopy of tree dripping with fruit with corridors to run down and play amongst.  Quite a contrast to the current barren rock school yard, so hot in the Indian sun.  We brought huge jack fruits from the farm to share with the children at the end of the day, many who had never tasted that fruit before.  It was a super joy filled day.  The vegetable beds were planted another day and already now at the end of September some food from them is being added into the school lunches.  I just visited the school at the end of September and it is amazing to see how much the trees have grown.  When you are in Telangana drylands in the heat of the summer and everything is so dry it is hard to imagine the change that occurs when the tropics monsoon rains come and there is rapid plant growth.

I am so grateful to have been a part of giving the children an opportunity to have a wider diversity of food and nutrition, as well as having the experience of how important trees are to our ecosystems.  We shall see in the future how this project affects the surrounding village farms.